The idea here is to build an interval around the currently sampled value and then sample uniformly in the interval until a sample is obtained where the target evaluated at the proposed value is larger than the slice auxiliary variable. There is a tuning parameter w that is the initial interval width and the interval is constructed by

The maximum number of steps taken can be controlled. 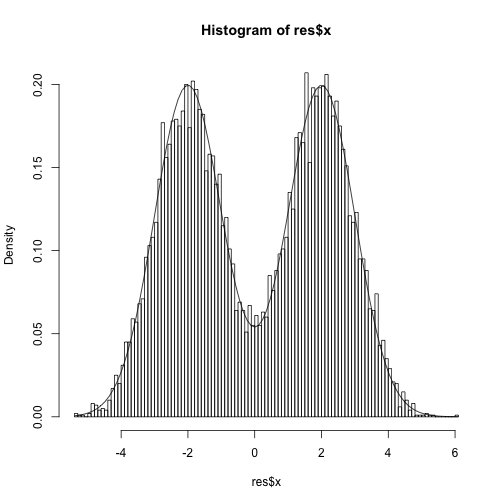 The doubling slice sampler has the same idea except that rather than adding a fixed width to the interval every time, the width of the interval is doubled in size either to the right or to the left. Given the tuning parameter w that determines the original interval width, the interval is constructed by

The maximum number of doublings can be controlled.

The doubling procedure can be more efficient if w was chosen too small as it attains a larger interval in the same number of steps. This efficiency comes at the cost of an additional check when trying to accept a proposed value. From the manuscript

The function to perform this check is ‘accept’.